words across the water 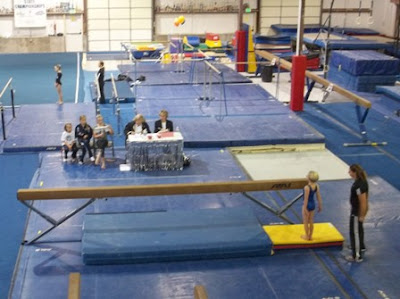 This was the moment I decided "WE" were no longer going to do gymnastics.  We were done.  She was in (old) Level 4 (that would be level 3 now). I looked down over the floor at Beach and her thick glasses.  I looked at the spot in her fancy meet hair where her glasses had gotten hopelessly tangled right before floor.  I looked at the mats she needed to stand on to be tall enough to mount the beam.  I looked at those judges waiting to judge my tiny little daughter and my heart said, "F*&$ this!" 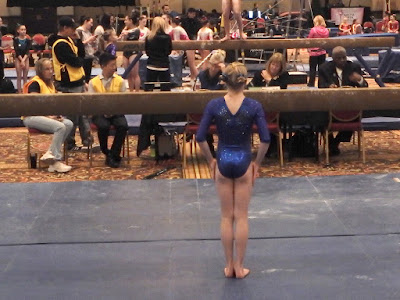 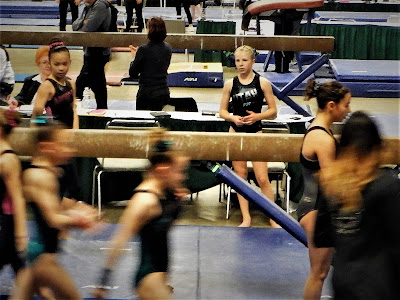 She rode in the backseat of cars and rented vans.  She boarded planes and airport shuttles.  She stayed in hotel rooms and Air B&B houses.  She ate food I never thought she would.  She saw places I would never have taken her.  She did big things and got judged for them.  Got up and did them again. 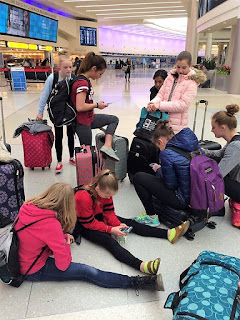 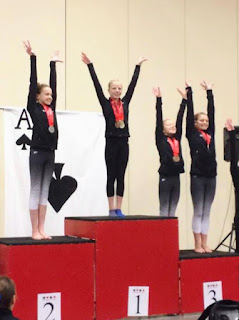 At gyms all across the country, gym moms are struggling with how to fit into this world.  Many treat it as a crowded bus. They are pushing coaches and gym owners aside. Trying to push their kids forward. They are talking in hushed tones about other people's children- trying to push them back.

I would love to give them advice. I would love them to know there is plenty of room for all of us on this crazy bus. Unfortunately, it seems more often than not they have to figure it out for themselves. 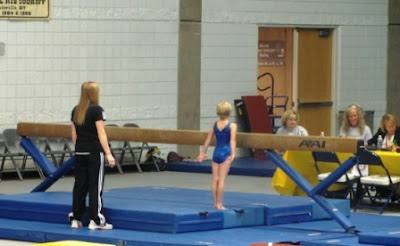 They have to figure out how the seating around here really works. What level your child competes, what spot on the podium they stand, it doesn't have anything to do with how good a parent or person you are or aren't.

(I could even argue it says almost nothing about your child either, but that is another conversation entirely. One would also need to witness a true victory like Bronte's last floor routine, Maddie's first-ever cast to handstand on bars, Claire's bars at State 2017, Beach's one-footed dismount on bars due to an injury on floor, or Sophie's wreck off beam, remount to finish with blood dripping down her face at Pike's Peak, you would have to see these things to even begin to relate.) 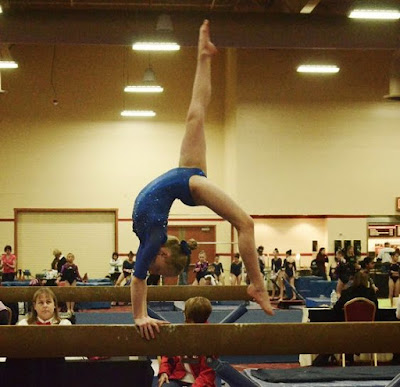 You know what does reflect back on you as a parent and a person?  How you behave. What you say when you think no one is listening.  The messages you are sending your child about being part of a team, about sportsmanship, about hard work, about respect, and about being honest with themselves.

Did you know our head coach does not assign levels to the optional team? He doesn't have to, they know where they are in the program.  In the fall he has them tell him what level they will be competing. 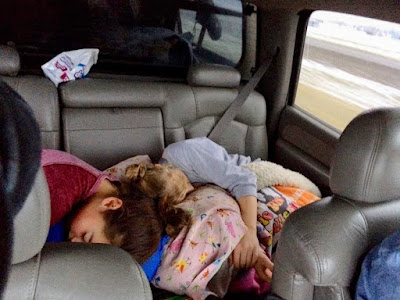 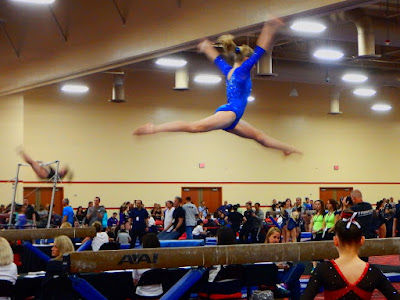 Pushing isn't just about the things you say to your child after practice it can be the pressure you put on her coaches to push or promote before your child is ready. It can be in the things you are saying about her teammates. 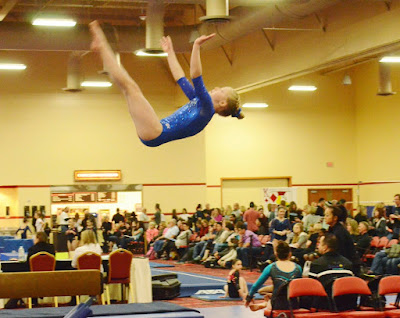 I have a kid who more often than not has all the skills to compete the next level up. What she doesn't have is the temperament for it.  She is conservative.  Sometimes timid.  Thank dog her coaches recognize and respect it! 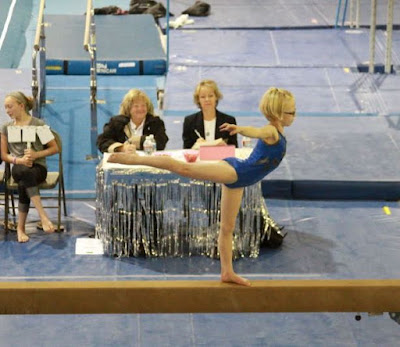 If you are a pusher of any type this is my caution to you. Your child is giving up trading a giant chunk of her childhood to work. 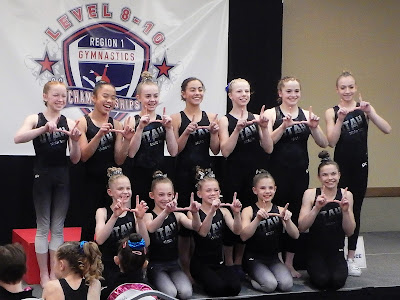 In the lower levels that work is mostly fun with a topping of scary.  As she moves up that ratio changes dramatically.  There are days when I have watched my child cry and cry and cry and remount the beam only to fall and fall and fall.  My child is working a triple series on beam: a front aerial-backhand spring "flick"-layout.  The only thing worse than seeing her not make it is seeing her make it because I know that is what she will compete this year. 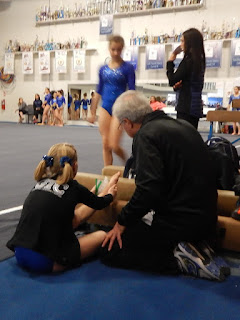 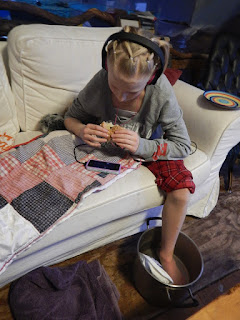 If she was doing this for me, if she was working this hard, this long, for me- how would I justify that to myself?  What if she was to get hurt... I mean really hurt. What would a pusher parent tell themselves then? What do you say to the intake nurse? I know more than her coaches. She doesn't take enough turns.  She isn't working hard enough.  She needs to just do it. More privates are the answer. She better than Sally but her coaches don't see it. Another gym, another coach, another program will move her up faster. 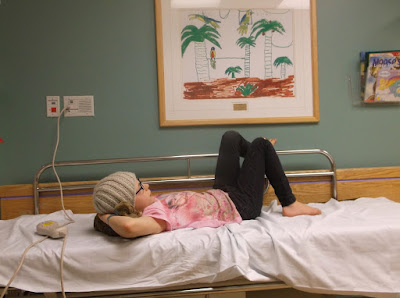 I don't agree with everything my child's coaches and the gym does but overall I know we are in the right program surrounded by the right people. There are a lot of messed up programs out there!  Teammates who have left for other gyms are returning. Each left for a different reason.  But they all returned for the same one: to put their child's needs first. 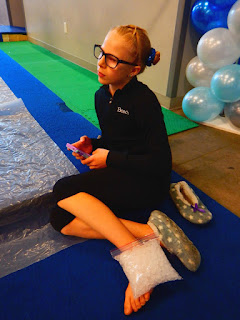 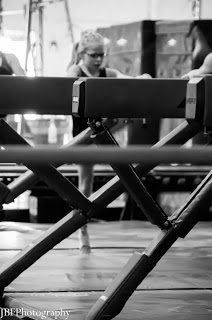 And in the end and in the beginning I'm not her coach I'm her parent. When SHE started gymnastics I already had a job.  I am her mom. HER doing gymnastics added a few items to my to-do list. Like getting her to the gym on time, fueled, hydrated, well-rested, and ready to go. My job is to make sure there are other things besides her sport in her life. My job is to protect and guide her as she follows her heart.  My job is to be a soft steady place for her to return to. 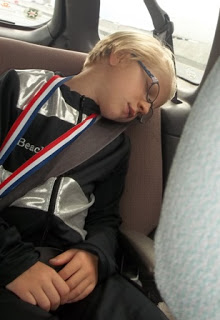 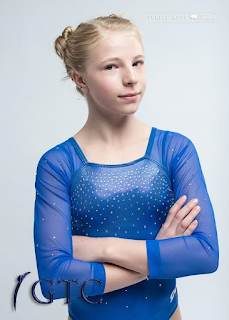 My job is to cheer at meets and not spill my coffee while doing it. When she "wins" my job is to listen to her tell me all about as if I hadn't seen it for myself.  When she falls my job is to tell her how proud I am of her and how much I enjoy watching her compete. When she asks me if I am disappointed I can say, sometimes I am sad for you but I am NEVER disappointed. How hard you work at every practice and every meet makes me proud.

I am proud of the things they don't give medals or awards for.  Like caring, and sharing, and being the best at helping teammates with mats. At working hard even when the head coach isn't looking.  At making friends with other girls from other gyms at meets. For being true to yourself. 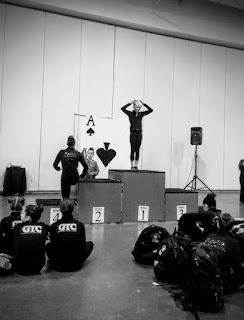 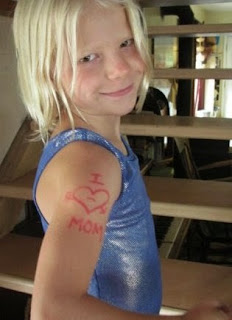 I am really glad WE quit gymnastics.
I was never any good at it anyway. 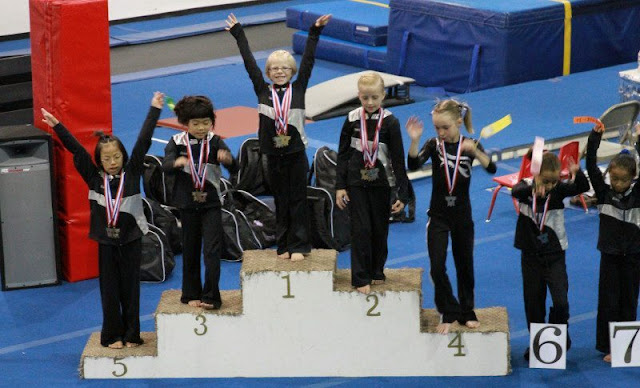 Email ThisBlogThis!Share to TwitterShare to FacebookShare to Pinterest
Labels: the life and times of Little Giants, village life

life in and around SLC 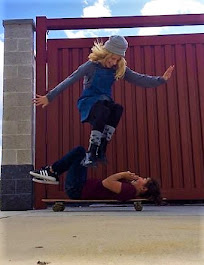 farm-a-cation on the R & B farm 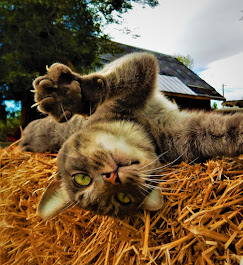 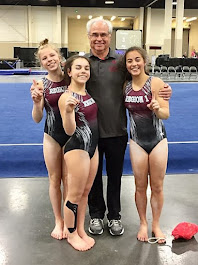 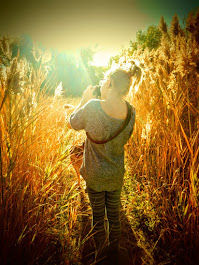 Misty Brown
I am the mom of 4 kids. That is a lot of kids! Homeschooling the youngest, Beach, our little ninja. She is a competitive gymnast with tons of personality & a unique perspective on life. She makes her own way through the world with a visual disability. We live, farm, & school on a small urban farmstead west of the beautiful city of SLC.